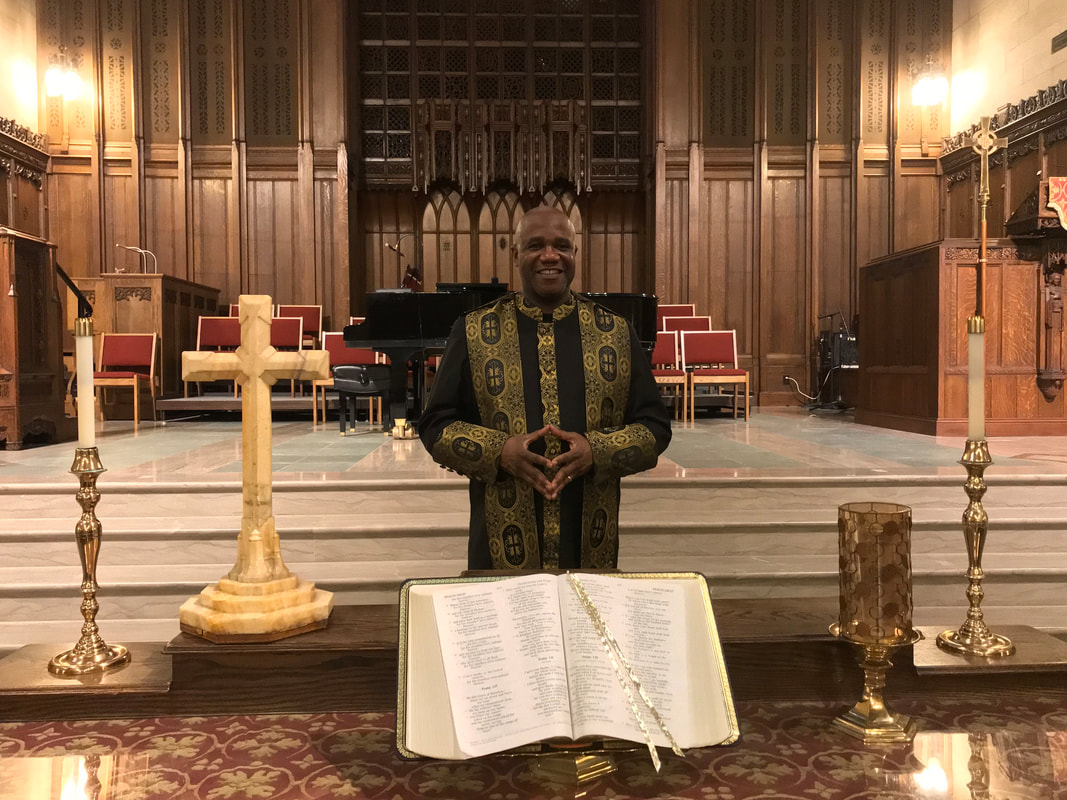 D. Anthony Everett, a.k.a. “Pastor E,” is the first African American pastor of Church In The Circle - University Circle United Methodist Church in Cleveland, Ohio.  As an advocate, preacher, pastor, public servant, lecturer, and Christian social activist, Dr. Everett has a passion for human rights, issues of social justice, and the intersectionality of those struggles.

The call to discipleship came to Dr. Everett in Dallas, Texas on Saturday, June 8, 1996.  A friend invited him to a wedding at St. Luke “Community” United Methodist Church.  Upon entering the sanctuary of the church, Dr. Everett’s attention was drawn toward the stained-glass windows of civil and human rights leaders and Biblical characters who were depicted as people of color.  When he noticed the window of El Hajj Malik El Shabazz (Malcolm X), he rationalized that if the church could accept Malcolm X, perhaps they could accept him.  The pastor of the church, now pastor emeritus Reverend Dr. Zan Wesley Holmes Jr., invited Dr. Everett to attend church the next day and he had not stopped attending since the wedding.

After serving in lay ministry at St. Luke and committing full-time to ministry, Dr. Everett served as Associate Pastor for Minorities at the SMU Wesley Foundation where he led discipleship, evangelism, and a mission trip abroad for undergraduate students.  Dr. Everett moved to Highland Hills UMC and then, to Hamilton Park UMC to serve as the youth pastor at both churches.  At Hamilton Park UMC, Dr. Everett founded the Hamilton Park Youth Development Corporation – a faith-based, non-profit 501 (c) 3 created to enable oppressed African-American youth to become agents of social change in the community.

After graduating from Perkins, Dr. Everett joined the Kentucky Annual Conference as the Associate Director for New Church and Congregational Development with a specific focus on revitalizing African American churches and ministries throughout the conference.  He developed a ministry action plan and launched Nia Community of Faith - a new church plant in Lexington, KY.  Nia became known as a community of faith focused intentionally on social justice and Dr. Everett created a nontraditional church atmosphere with spoken word events, a Bible study reviewing Michelle Alexander’s seminal book The New Jim Crow: Mass Incarceration in an Age of Colorblindness, workshops against the death penalty in conjunction with the General Board of Church & Society, advocated in support of immigrant rights and the Dreamer’s Movement, and led rallies against police brutality in the Trayvon Martin case.

For the cause of social justice, Dr. Everett has been outspoken at Lexington City Council meetings, the Commonwealth of Kentucky legislative sessions, Kentucky Commission on Human Rights hearings, Fayette County School District meetings, meetings in the offices of Kentucky's congressional representatives including US Senate Majority Leader, Mitch McConnell, and meetings with Obama administration representatives at the White House.  Featured in the United Methodist Interpreter Magazine as a criminal justice clergy person, Dr. Everett has advocated at the local, state, and national levels for sentencing and criminal justice reform legislation.  He has been a supporter of the Takeback Cheapside Movement that advocated for and successfully removed two Confederate statues receiving national notoriety at Cheapside Park in Lexington, the location of a former slave auction block.

An outspoken advocate for the rights of the LGBTQIA+ community against discrimination, homophobia, and heteronormativity, Dr. Everett has been an ally/accomplice with Kentucky Reconciling Ministries, Bluegrass Black Pride, and Lexington Fairness, receiving the 2016 Ally Fairness Awards from the latter two organizations.  In conjunction with the University of Kentucky, Dr. Everett provided a community screening of the film, An Act of Love. He has been a frequent guest speaker at ecumenical and inter-religious gatherings, rallies, and vigils.

A sought-after preacher and lecturer, Dr. Everett has made numerous presentations before church, civic, and collegiate bodies on topics of interest ranging from mass incarceration to civil rights and racial justice.  He has also served on the Commission on Racial Justice for Alpha Phi Alpha Fraternity, Inc.

Dr. Everett enjoys traveling and has traveled throughout North America, Central America, the Caribbean, and 35 of the 50 United States as well as two U.S. Territories - St. Thomas and Puerto Rico.  Born in Washington, D.C., Dr. Everett is married to the love of his life, Dr. Angelique Clay Everett, an internationally acclaimed soprano soloist.  They have an empty nest blended family with four adult children and one grandchild.